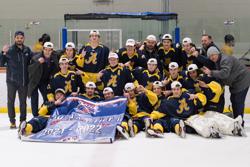 The final 2022 AAHA District Champions were crowned Monday afternoon, ending a highly competitive season of Tier-I hockey across the Affiliate.

The championship tournament started on Saturday afternoon, featuring four games with one each at the 14U, 15O, 16U, and 18U level. At the youngest age level, Flyers Elite Youth faced off against the New Jersey Rockets. In the first game, Flyers Elite shut out the Rockets 3-0. The Rockets came back on Sunday with a vengeance, but were not able to outpace the Flyers. With a 5-3 victory, the Flyers ended the series in only two games and earned their ticket to USA Hockey Nationals in the windy city.

The 15O division was a longer endeavor, with a matchup between the North Jersey Avalanche and New Jersey Rockets. On Saturday afternoon, the Avalanche ran up a 6-2 victory. In a close match, they were unable to hold off the Rockets who earned a 4-3 overtime victory Sunday. In a head-to-head defensive battle Monday, the Avalanche headed into the third period with a lead. The Rockets came from behind to tie the game and push into overtime. Only three minutes into overtime, the Avalanche scored with a one timer and will head to Nationals in Plymouth, Michigan.

The 16U division saw a similar composition, with the North Jersey Avalanche facing off against the New Jersey Rockets. The Avalanche earned a 3-0 shutout on Saturday evening, heading into Sunday confidently. They settled the series in two games, with a 4-3 victory over the Rockets and will head to Rochester, Michigan at the end of the month.