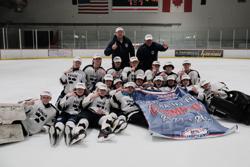 During Championship weekend in the Atlantic Affiliate, the final Tier-II Champion and Nationals team for the State of New Jersey was crowned at Ice House in the 14U division. The Protec Ducks faced off against the North Jersey Kings in a best-of-three series for a ticket to Kalamazoo, Michigan.

In the final season for the Protec Ducks as a club, the team hit the ice with the goal of making it one to remember. Saturday afternoon’s game did not disappoint. In a well-balanced match, the Kings and Ducks raced back and forth across the ice to establish themselves ahead in the series. After three full periods, the score was tied and pushed the first game to overtime. The Kings demonstrated their hunger for the W, scoring the sudden death goal that would give them a one game advantage in the series.

As the Ducks stepped onto the ice Sunday morning, they knew this game would be one for the history books. With grit and determination they worked hard from the first puck drop. But the Kings endurance and skill was too much to overcome. The Kings built a lead early in the game and continued spreading that lead for two whole periods. By the end of the game, the Kings had delivered an 8-2 blow to the Ducks, punching their ticket to Michigan where they will take the ice for their first game on March 31.