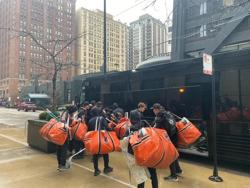 ROCHESTER, M.I. - USA Hockey Nationals kicked off Wednesday morning for the Tier-I Youth tournament with Tier-II Youth and Girls Tier-I and Tier-II tournaments starting Thursday. Teams from the Atlantic District traveled across the nation for their chance at claiming the title of 2022 National Champion.

In the first games of the tournament, the Tier-I 16U New Jersey Rockets faced off against the Rhode Island Saints. 51 minutes were not enough to determine the fate of the contest. And after a five minute overtime period, neither team scored. The game proceeded to an 11-person shooter. Goaltender Ethan Marich kept the Rockets in the game for the rounds, and was helped by Kristofers Krumins who scored the game winning goal.

Earlier in the day, the Tier-I 16U North Jersey Avalanche put a goal in with less than a minute to go in the first period against Culver Academy. They managed to hold onto that lead for the entirety of the second period. Following the intermission, Culver came out strong and put one past the Avalanche defense. The Avalanche turned up the intensity and Brandon Hilton scored the game winning goal halfway through the third period assisted by Brian Nicholas. They kept their 2-1 lead for the remainder of the period and earned the three points in round robin play.