Colonials Girls rally from behind for shoot out victory 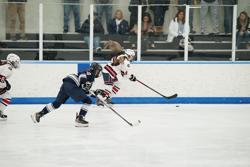 WEST CHESTER, P.A. - Spectators were on the edge of their seats at Ice Line Thursday afternoon for the New Jersey Colonials’ first game of the Girls Tier-II 16U National tournament. In a competitive display of skill that raced back and forth across the ice, the Colonials found themselves behind St. James Hockey Club (Virginia), 2-1, with only minutes to go in the third period.

With 3:36 to go in the period, Charlotte Cote pushed the puck forward through St. James’ defense to Jessica Sperling who sunk a one-timer in the back of the net. The Colonials moved to center ice with a tie game and only minutes left on the clock.

One offensive play after the next, they moved the puck around St. James’ zone trying to put another behind the netminder and end the game in regulation. But when the buzzer rang, it was still a tie game and headed to overtime.

The fourth period continued in much the same way the first three did - an even sprint up and down the ice. Both teams continued to battle in the corner, move the puck around the offensive zone, and crash the net. But the goaltenders were hungry for a victory and neither let the puck past them. After a five minute overtime, the game headed into a five-person shootout.

The Colonials decided to shoot first and goalkeeper Stephanie Xhumba was ready to go. Logan Gromek shot first for the Colonials and was unsuccessful. Xhumba matched the save. Stephanie Martin shot next, sending the puck wide of the net. St. James’ second shooter managed to sneak one by Xhumba, giving them a 1-0 advantage. Jessica Sperling went to center ice, raced down, and put one past St. James. Xhumba saved the matching shot. Tied up at 1-1. Charlotte Cote kept the intensity going, and got another goal for the Colonials. Xhumba stopped another one, moving the score to 2-1 in favor of the Colonials with just the final round. Mandy Scott took the final shot, but was unable to get past the tender. Xhumba knew it all came down to this moment - and she saved it.