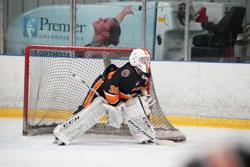 IRVINE, C.A. - It was relatively quiet for the first two periods of the Philadelphia Blazers game against the host team, Anaheim Jr. Ducks. Late in the first period, the Ducks got on the board. Play was competitive up and down the ice, but neither team was able to make it past the netminders.

With only 14 seconds to go, Maximus Madallo put one in for the Blazers assisted by Sean Marshall. The teams left the ice tied, 1-1, with the opportunity to set the tone following the intermission.

The Blazers did just that.

Only a minute into the third period, Madallo got the Blazers the lead. But this was not an ordinary goal. The play started in the defensive zone when Brady Baehser battled for the puck along the boards, lost his stick, and proceeded to kick the puck out of the zone. Baehser continued to maneuver the puck with his feet before passing it off to Joel Schriver.

Schriver realized he was alone, expanded the ice, and moved behind the net before finding Madallo who was crashing the front of the net. Schriver passed it to Madallo who fired a one-timer into the net. The whole momentum of the game had swung to the Blazers, and it all started with Baehser’s stickless breakout play.

Two minutes later, the Blazers scored another goal. Wade Courtney took the honor, unassisted. For the remaining 13 minutes, the Blazers battled, coasting to a 3-1 victory against the team with a home ice advantage.