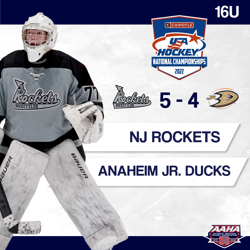 ROCHESTER, M.I. - The 16U New Jersey Rockets came away with their second win of the USA Hockey Nationals on Thursday afternoon. In the game prior, the Rockets went to overtime and eventually an 11-person shootout against the Rhode Island Saints. Center Kristofers Krummins would end it in the shootout putting the Rockets over the Saints, 3-3 (SO).

Only a day after the win, the Rockets were right back at it against the Anaheim Junior Ducks. The game began off to a slow start as neither side could get much going in terms of offense. Later in the first period, the Ducks would make the first noise of the game as left-wing Ty Hendricks sniped a shot from the corner of the ice. However, the Rockets would quickly answer with a goal of their own. Center Kamil Bednarik skated past the entire Ducks defense and finished off the play with a goal. A couple of minutes later, the Rockets struck again on the scoreboard with a one-timer goal from Billy Sheridan. At the end of the first period, the New Jersey Rockets led the Ducks, 2-1.

In the second period, it was another defensive standoff for the first 10 minutes. However after the 10th minute passed, the Ducks tied it all up at two with Jakub Kohn getting the goal off of an assist from Ty Hendricks. It would not be much later until the Rockets put themselves back in front as left defensemen Matthew Desiderio found himself alone in front of the goal and with no hesitation, he buried it into the back of the net. This would be all for the third period as each side tallied another goal to the score to make it 3-2, Rockets heading to the final period.

After the intermission, the Ducks came back firing. Right-wing Colin Frank took the puck from the faceoff, sped his way down the ice, and sent the tying goal into the back of the net. The Rockets would not let the Ducks feel comfortable for long though, as Krummins notched his second goal of the game in the closing minutes. Nonetheless, the Ducks would not go away. Right-wing Jason McKee got the rebound off of goaltender Ethan Marich and put it right back into the net. Once again, the game was all tied up. With seven seconds left to go in regulation, the Rockets were looking for the finisher - and they did just that. Bednarik buried his second goal of the game with under 10 seconds remaining in the contest. The buzzer-beating goal ended up putting the Rockets over the Ducks by a final score of 5-4.

The Rockets hope to continue their USA Hockey Nationals success as they face off against Shattuck St. Mary’s at 10 AM.