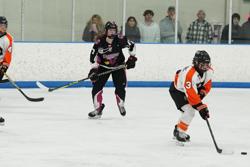 WEST CHESTER, P.A. - Rinks were alive with energy starting early Sunday morning as Atlantic Affiliate teams battled one another for a spot in the Girls Tier-II USA Hockey National Championships.

In the 14U division, the Little Flyers and New Jersey Bandits met for a contest to determine who would advance to the early evening game. Following a season in which the two teams went back and forth every contest, the quarter final did not disappoint. The Bandits were first on the board, but the Little Flyers quickly responded to end the period even. The second period was relatively calm, until just under two minutes to go when the Bandits edged ahead. But a cross-checking penalty against the Bandits gave the Little Flyers an opportunity that they took advantage of and evened the score back up.

Following the intermission, both teams came out hungry for the victory. It all came back to these 16 minutes of play. The game raced up one way, turned, and quickly raced back down to the other end. With only five minutes to go, Alyssa Viola from the Little Flyers scored what would be the game-winning goal, assisted by Paige Russell. The Little Flyers scored an empty netter before finishing the game 4-2 and ending one of the most competitive seasons of Girls Tier-II 14U hockey the Atlantic Affiliate has ever seen.

In the 16U division, the Jr. Flyers skated to an easy victory against WEHL South Central, 3-0. The Jr. Flyers came out strong, delivering their first blow to South Central towards the end of the first period. The second period was competitive, and while the Jr. Flyers did not strengthen their lead, they dominated play. By the third period, the Jr. Flyers established their dominance, with a goal from Elizabeth Muther, assisted by Gabrielle Snedeker. Samantha Stead would go on to finalize the game with another goal, for a final score of 3-0.

The Little Flyers came out hungry for redemption, with Evelyn Prydakin scoring a goal, assisted by Bonnie Kate Mundy. Nervous that they could lose their lead, the Jr. Flyers came back with another goal, before scoring an empty netter to solidify their 5-2 victory and advance to the semi finals.