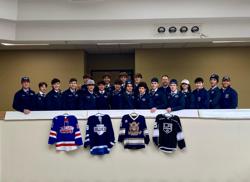 KALAMAZOO, M.I. - Atlantic Affiliate teams are headed to quarter finals in every age level of the Tier-II youth USA Hockey Nationals. With the 14Us in Kalamazoo, Michigan, the 16Us in Troy, Michigan, and the 18Us in Irvine, California, the teams are competing across the nation for a spot in Championship Monday play.

The 14U North Jersey Kings started their morning early with a game against the Tampa Bulls. In one of the most competitive games of the week, the Kings and Bulls went back and forth, period by period. The Kings were first on the board, quick off the drop with a goal by Benjamin Barnhill, assisted by Dante Mangarelli only 21 seconds into the game. The Bulls found a way back in only minutes later. At the top of the second, it was the Bulls who got on the board first. But Vincent Crisafulli got one past them with the help of Benjamin Barnhill and JT Calafati. The Kings had a repeat of the first period in the third, when Jase Zangara scored only 28 seconds into the period. But the Bulls answered and pushed the game to overtime.

Following a swift breakout from the zone, Ryan Vanzile took a shot on net from the outside. The Bulls’ goalie gave up a juicy rebound that Jase Zangara picked up and throttled into the back of the net.

The 16U Montclair Blues had an easier time, with their quarter final matchup against the Jr Sun Devils. After opening up slightly flat footed and allowing the Sun Devils onto the board first, the Blues got on the board with a goal by Pyotr Sysak, assisted by Jack Macevoy. At the top of the second, the Sun Devils put another one in - but the Blues had had enough. Jack Macevoy scored two in a row before Rowan Brennan scored a fourth. The Blues went into the intermission ahead 4-2.

In the final period, the Blues opened up strong, with a goal from Luca Infusino. The Sun Devils tried to pull back into it and got one past the netminder, but in the end the Blues scored an empty netter and secured their spot in the semi final with a score of 6-3.

On the West Coast, the Philadelphia Blazers came from behind to beat the Clearwater Ice Storm. Goaltending dominated the first period, with neither team getting on the board. At the top of the second period, Brady Baehser sneaked one past the Ice Storm assisted by Salvatore Vitale and Colin Moore. The Ice Storm responded with two goals, leaving the Blazers down by one as the Zamboni took the ice.

The Blazers came out strong in the third, with a goal by Joseph Hathaway assisted by Maximus Maddalo halfway through the period to tie the game. With just under five minutes to go, Brady Baehsar scored the game winning goal that would bring the Blazers to semi final action and a chance at a spot for Championship Monday.