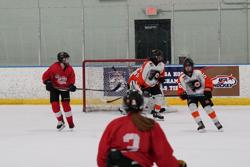 WEST CHESTER, P.A. - For a season that starts in August for some teams, Championship Monday can feel like it is centuries away. Practice after practice, game after game - it all leads to this day. League playoffs feed into District tournaments, which lead to the National tournament. Teams have been playing since Wednesday at different tournament sites across the country. First it was pool play, followed by the bracket that ends in the crowning of National Champions.