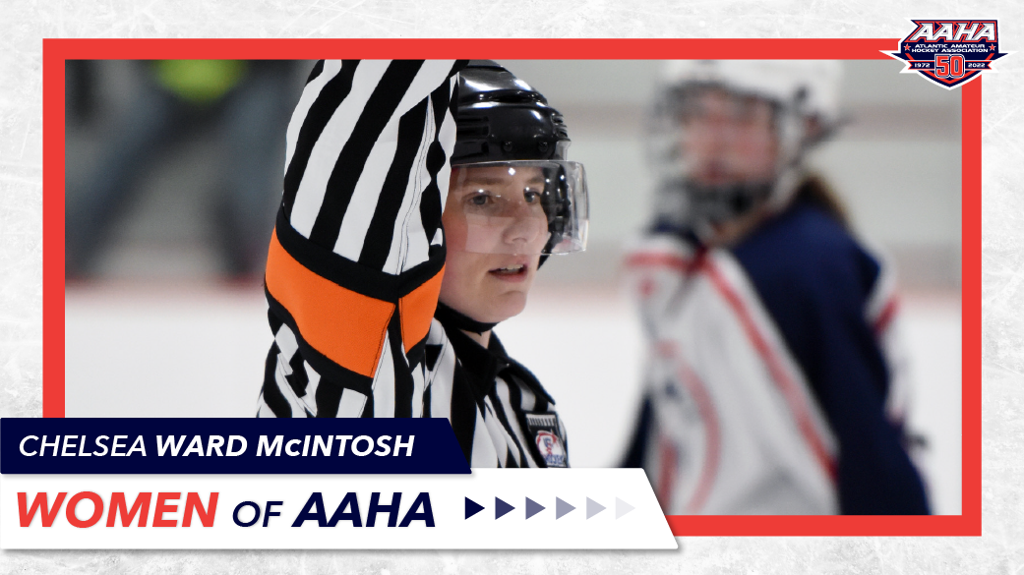 HO-HO-KUS, N.J. - When Chelsea Ward McIntosh first saw hockey players on the ice following her figure skating session, she told her father that she wanted to try the sport. He responded, “girls don’t play hockey, but go ahead and if you want to try.” A number of years later following a successful playing career, Ward McIntosh was on the ice in 2021 officiating the first women’s professional hockey game played at Madison Square Garden.

Ward McIntosh attended Neumann University playing NCAA ice hockey. But her school year was filled with two other sports. She also played field hockey in the fall and lacrosse in the winter. When asked about the parallels between field and ice hockey, she said, “You have to have good communication with your team since there are so many players on the field and field hockey makes you able to see things in a bigger way.”

Following her college play, she wanted to stay involved in the game. She had spent a lot of time at the rink over the past four years and thought about trying officiating. “If I’m at the rink all the time, I might as well get paid to do it,” she said.

Today, her officiating resume includes NCAA D-I Womens, women's professional leagues, and Tier-III Juniors. She’s been wearing the stripes for the past 11 years, and has grown into an officiating leader with the title women’s officiating coordinator in the Atlantic Affiliate.

In her role, she helps new female officials prepare for their first games, as well as develop seasoned officials who want to take their game to the next level. “The coolest thing about officiating is that it gives you a career in hockey that isn’t really available to women otherwise,” she said. “Unless you make it into the sport professionally, officiating is how you can still be involved and give back to the sport that you grew up in and love.”

To girls who want to hop on the ice and try hockey, she had this to say, “Don’t be afraid. Don’t let anyone say it’s not for you. Put on the skates and try it.”

In her role as women’s officiating coordinator, she had a simple ask of current girls players looking for their next spot on the ice, “If you want to see more female officials, join the club. We need you out there.”